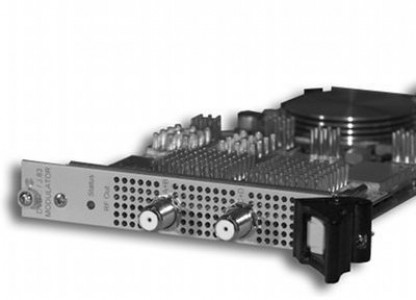 Appear DVB-S/S2 modulator
The Appear DVB-S modulator can provide outputs of either QPSK or 8 to 32 APSK. Suitable for satellite up link at either IF or shortly at Lband.

Appear’s leading edge DVB-S/S2 modulator is a fully frequency agile modulator aimed at modulating SD/ HD services on to satellite. This high density modulator is capable of producing up to 2 DVB-S or DVB-S2 modulated channels simultaneously. The modulator can be integrated with all available modules making it possible to combine reception, descrambling, re-scrambling, multiplexing, PSI/SI/PSIP regeneration and DVB-S/S2 modulation in the same chassis. The solution offers broadcasters both a higher rack density and lower power consumption, compared to alternative solutions. The DVB-S/S2 modulator is available in two different output configurations, IF or L-band (L-band to be supported in a later release).