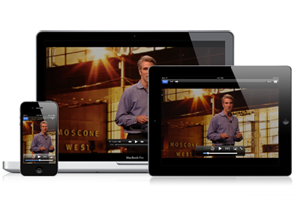 HTTP Live Streaming (also known as HLS) is an HTTP based adaptive streaming protocol created by Apple as part of their QuickTime X and iPhone software systems. It works by breaking the stream into a sequence of small HTTP-based file downloads, each download loading one short chunk of an overall transport stream. As the stream is played, the client may select from a number of different alternate chunks containing the same content encoded at a variety of data rates, allowing the streaming session to adapt to the available data rate. At the start of the streaming session, it downloads an extended M3U playlist containing the metadata for the various sub-streams which are available.

The protocol is in the first stage of being submitted to the IETF as a proposed Internet Standard.

HLS is widely supported in streaming servers from vendors like Adobe, Microsoft, RealNetworks, and Wowza, as well as real time transmuxing functions in distribution platforms like those from Akamai. The popularity of iOS devices and this distribution-related technology support has also led to increased support on the player side, most notably from Google in Android 3.0.

Since its requests use only standard HTTP transactions, HTTP Live Streaming is capable of traversing any firewall or proxy server that lets through standard HTTP traffic, unlike UDP-based protocols such as RTP.