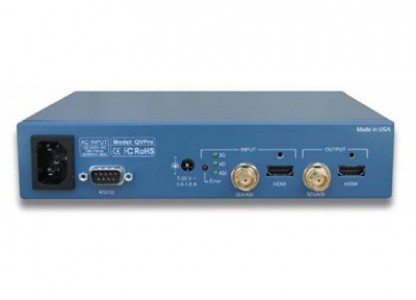 QVidium QVDec
The QVDec is an MPEG-2 and H.264 HD decoder which supports a patented ARQ error correction for reliable video transmission over the public internet. It supports 3G-SDI, HD-SDI, SDI, HDMI, Composite, SVideo and IP output and features can be incrementally licensed.

The QVDec has a unique patented Automatic Retransmission Request (ARQ) feed-back based error correction allows reliable delivery over best effort networks such as the public internet. ARQ is similar to TCP in that it informs the encoder if a packet has been lost during transit to the decoder, and requests a replacement to be sent. The benefit ARQ video transmission has over TCP video transmission is that TCP transmits an acknowledgement after each packet is received, where ARQ only transmits a negative ACK when a packet has been lost.